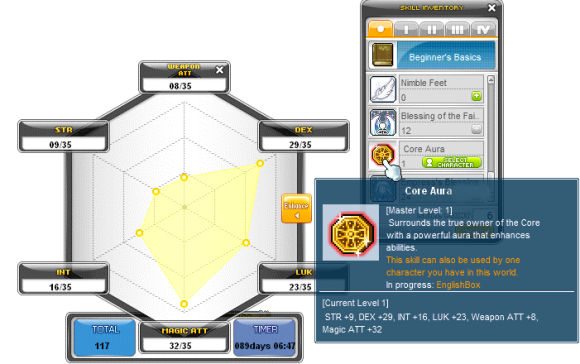 Sorry for posting these this late, been enjoying the patch and returning to the FPS game I liked before, Sudden Attack.

With the launch of the ZEN class, a new core system have been implemented which is relatively unique to them. The Core System allow ZEN character to share the ability with any other character similar to the Mercedes “Elven Blessing” but what make it special is that these core system of ZEN can be modified.

The core stats can be modified and share to another character as shown in the picture above.

ew Cash Items which will only be visible in the ZEN Cash Shop.

Stellar Cosmic Dust Solidifier
-The ability to freeze the current core stats for 30days upon each consume.
-The core stats can only be freeze for a max of 365 Days.

Note:
-The core system will be unlocked upon any usage of “Supernova Dust” and “Condensed Supernova Dust”.
-No reimbursement will be made for any accidental modification to the core stats which cause the “Stellar Cosmic Dust Solidifier” to lose it effect on the core systems.

Supernova Dust
-The ability to re-config the core stats and have a chance to increase it tier.
-The max stats tier is capped at 35 per stats.

Note:
-Although Supernova Dust have the ability to increase a stats tier, it also have the ability to drop the stats tier back to the basic (This effect will happen randomly).
-The core stats will be reset to default once the timer is up, please ensure that you have use “Stellar Cosmic Dust Solidifier” to freeze the stats.
-No reimbursement will be made for failure to freeze the stats and resulted in the lost of the core stats.

–NEW Only a “Completed Core” (Level 120 Core) will have a chance to have its tier increased.

Cosmic Dust Shifter
-The ability to turn the core stats in the clock-wise direction once.

What is Golden Temple?

Golden Temple Returns with increased Sunburst drop rate and is only available from 31st October 2012 to 5th December 2012!

The monsters inside this map offer more EXP and item drops than any other maps available! What’s more, there is a powerful boss for you to conquer! It will drop rare items, especially the Ravana Helmet!

How do I go there?

Talk to NPC Dao to access into the different Monkey Temple available for players of different levels.

Talk to NPC Chan to access into the different Goblin Cave available for players of different levels.

However, player are required to purchase the Golden Temple Ticket from the Cash Shop, in order to access into the different Goblin Temple maps.

I am ready to challenge the Ravana Boss!

and a party of minimum 2 players are required to enter the boss map.

To collect sunburst, you are required to eliminate the monsters in the Monkey Temples and Goblin Caves of the Golden Temple.

Difficulty of the Ravana Boss will be adjusted automatically according to the average level of the party members. According to the difficulty, various equipments, pieces of time, Ravana Helmet will be dropped.

From 31st October 2012 till 14th November 2012, Premium Mini Dungeon (PMD) is back with better rewards and even more EXP bonus!

What are the features of Premium Mini Dungeon?

• Single / Party mode available. (You only need to buy 1 Party Coupon to bring your whole party in!)
• Increase exp bonus on requirement kill counts.
• Talk to NPC Rechanuni for rewards.

How to enter into the dungeon?

with you and head to the Dungeon.

to enter into the Premium Mini Dungeon.

• When you hunt monsters in PMD, you will earn Clover coins

when you hunt the monsters. Collect them for rewards!

at the entrance to exchange your coins for items!

• You can exchange the Clover coins

for the following items:

[PMD] Mystery Box (Stand a chance to get

Miracle Scrolls in this box!)

Here is the Patch Notes Of Justice Patch Part 1

The following events will be activated on 31th October 2012, 0900hrs to celebrate the launch of the Justice Patch

To celebrate the Justice Patch, there will be a festival for one and all!

i) Justice Festival Every Day! (Repeatable once per day)

Maplers above level 10 will be able to receive 1 Justice Coin everyday by clicking on the Justice notifier on the left side of the screen.

ii) Try Out the Level-Up Guide! (Not repeatable)

Maplers above level 10 will receive this quest. By trying out the Level-Up Guide, Maplers will be able to receive2 Justice Coins.

Maplers above level 10 will be able to accept this challenge. Upon accepting the challenge, Maplers who level up 5 times will receive a 1 Justice Coin!

This challenge pits you against the monsters of the Nett Pyramid! Successfully survive 15 waves to receive1 Justice Coin. This event only applies to Maplers from level 60 – 109.

Try out the revamped party quests and earn Justice Coin at the same time! Complete any 3 of these party quests) to be eligible:

In addition to the Justice Festival we will also be having a Level-Up Bonanza!

Create a new Pirate / Thief Explorer (Ultimate Explorer Included)or Knights of Cygnus , accept the quest in the event notifier. When this particular character reaches level 70 (80 for Ultimate Explorers)during the event period, you will receive a Ring of the Forces!

After level 120 too hard to level? Here’s another reason for you to level after 120! Pirate / Thief Explorer (Ultimate Explorer Included) or Knights of Cygnus who reaches level 120 will be able to take up this challenge. All you have to do is to gain 3 levels and you will be able to obtain a weapon scroll!

During the event period, Pirate / Thief Explorer (Ultimate Explorer Included) or Knights of Cygnus will be provided with free equipments! You can obtain the equipment boxes through the event notifier every five levels from Level 10-40 and every ten levels from level 40-70.

That’s not all! When a Pirate / Thief Explorer (Ultimate Explorer Included) reaches level 70, you will be rewarded with a Special Mastery Book of your choice! This includes the new skills!

Have old skillbooks that are no longer in use after the revamp? Do not fear! From 31 October 2012 to 16 January 2013, talk to the Maple Administrator to exchange your obsolete skillbooks for a new one of your choice!

i) Bounty Hunter
The leaders of the various towns have put up Wanted Posters in most towns.

Accept the quest given by the Poster and start hunting the wanted monsters!

These monsters will drop Bounty Marks.

The Bounty Marks can be given to Cassandra who will give rewards of experience, power elixir and one of the following four items:

ii) Tracking the Outlaw
The leaders of the various towns have another problem! There are Outlaws hiding all over the Maple World and they require your help to take them out! The Outlaws will drop Wanted Criminal Clues.

Collect 50 of the Wanted Criminal Clues and turn them in to Cassandra to receive experience and special equipment.

Gaga is starting an Ancient Artifact Hunt again! Just like before, Gaga wants you to look for Mysterious Artifacts

There’s more! When collecting the Mysterious Artifacts, you will occasionally pick up a special artifact and receive a quest notification and by turning each artifact to the appropriate NPC to receive EXP and to progress toward earning a medal.

Playing the ZEN class and dont have enough Justice Coins or a good helm? Have no fear! We are giving away helms and Justice Coins! Log in during the event period and click the box icon on the left side of your screen

Upon clicking the icon, you will receive a Justice Gift Box which can only be opened on the 10th of November 2012.

Opening the box will give you the following items and 20 Justice Coins!

That’s all I think… Its only part 1 and there’s so much to cover…. Dont forget that the part time job and character card systems are out, so make use of them!

This work is licensed under a Creative Commons Attribution-NonCommercial 3.0 Unported License.