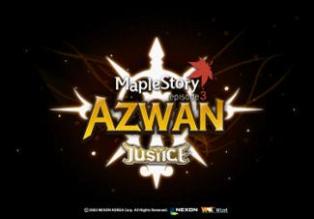 Tomorrow will be the final patch for Justice Update which is the Azwan Patch!

Azwan patch will include Hilla(  A new boss monster) and a new “world vs world” pq! It also include the Inner ability skills!

Azwan is an ancient underground city beneath the Nihal Desert. It was recently rediscovered by the Cygnus Knights, following the attempt by its leader, Hilla, to usurp Empress Cygnus’ throne.

Hundreds of years ago, Azwan was a beautiful and thriving metropolis. The beautiful and powerful Hilla, who was a chief sharmaness, craved more power. In exchange for eternal power, youth and beauty, she betrayed her city to become a commander under Black Mage.

She took control of Azwan and used necromancy to revive its dead population as minions in her army. She lined the city with giant, magical totems to recapture the souls of her fallen forces so they could returnagain.

The obelisk that serves as the entrance to Azwan has recently reappeared in the desert and has come under investigation by the Cygnus Knights. Intrepid adventurers can join the fight, leading forces from Ereve in their battle to defeat Hilla’s army and free the enslaved souls of the citizens of Azwan.

By visiting the Mirror of Dimension, you will be able to head forth to the Cursed City, Azwan.

What is occupy and Attack mode?
These modes focus on a tower assault strategy.

How do we play it?

Tips
If enemies reach the left side, the Guardian Tower will recover HP.

The Owl Tower
The Owl Tower drops rocks on you for massive damage. These rocks deal damage without regard for any avoidability or invulnerabilities that you might have.

How do we avoid it?
Try to take cover while they hover in the air for a moment before dropping.

How to avoid it?
You can use your Cygnus minions as shields in this situation; if they’re nearby, they’ll take the brunt of the blast instead of you.

Watch Out!
Watch out for stone statues that drop onto the floor as it indicates that the Guardian Tower is about to release its super attack.

What to avoid?
Avoid pentacles on the ground when it uses its storm cloud attack.

Differences
There are some differences between the Occupy mode altars and the Attack mode altars:

What is Defence mode?
This mode focuses on a tower defence strategy. Prevent the Cygnus Faith Stone from being destroyed to win.

Ballista
When you see a message saying that a ballista has appeared, keep a look out for a red dot on the platforms. This is where the ballista will appear.

Avoid at all costs!

What is Supply mode?
This area functions much like a normal hunting mini dungeon.
There is no difficulty option for this mode.

Where and when do we find this quest?
Accept the quest at Longorias beween 2PM and 8PM.

How to play?
Monsters will drop Azwan Supply Boxes. Collect 100 boxes and use the portal within the map to visit Longorias to complete the quest. This is a repeatable quest on a daily basis.

Collect up to 150 coins per day by participating in the various modes.
Pick up your coins from NPC Woodwan in the Azwan Refuge Zone.

There are two types of coins:

What is the purpose of the Coins?

What do these items do?

Unique Azwan scrolls, Circulators to randomly change your Inner Abilities, and other items. Azwan scrolls can raise your equipment stats quicker than regular scrolls, but they cost more upgrade slots to use.

Jean Pierre’s wares changes regularly as you rack up victories in Azwan, but they will be reset to mirror NPC Popodom’s offerings when you log out. NPC Popodom’s wares do not change.

You might be able to find special recipes and new Emperor equips for sale from Jean Pierre.

How can we earn it?

When can we earn Honor Exp?

You can earn Honor EXP from 2pm to 8pm each day

How does Inner Ability work?

What does Inner Ability do?

Inner Abilities are similar to the Potential System but it is applied directly to your character instead of your equipment.

What is a Circulator?

A Circulator can be used to reset all Inner Abilities. You’ll get better results from using higher ranking Circulators.

How to obtain a Circulator?

For every 10 Honor levels reached, you can obtain a higher ranking Circulator from the Azwan merchants.

You can view your Honor level, Honor EXP, and Inner Abilities in the character statistics menu.

There is a total of 62 different types of Inner Abilities that you can obtain. Out of the 62 Inner Abilities, some of the more sought after ones will be the Attack increase which adds a maximum of 30 attack points and the Cooldown Skip ability!

With the discovery of Azwan, everyone is rushing to Nihal Desert. To counter the heat of the desert, we have prepared an Ice Box event for everyone! During the event period, Ice Boxes

filled with cool stuff will be dropped from monsters all over Maple World. Grab the ice-cool items from the Ice Boxes, but be careful not to get a brain freeze!

Stand a chance to get the following items when you open the Ice Boxes!

Transform into this cute little penguins with the transformation potions and even transform into Jr Ice. Spiritand enjoy this winter! Also stand a chance to obtain a Purple Surfing Board!

Note:
-Open the Ice Boxes before it melts on the 16th of January 2013!
-The Ice Boxes only drops for monster above level 10 (Some monsters are excluded).
-You will not be able to receive any rewards if the Ice Boxes are open after the event date.

Black-nosed Fur will collect the ornaments and place them on the tree, which will look fuller as more and more are put on. When it is complete, it’s leaves will fall, and the Christmas Ornaments will turn into Snow Crystals and scatter!

This is a Gateway Event, this means that when the tree has collected enough ornaments, it will drop Snow Crystals in all channels in all worlds in that particular gateway (Ares or Artemis)! Now is your chance to work together with your friends on other worlds for the rewards!

There are two types of snow crystals that will scatter when the tree’s leaves fall:

These can then be traded with Fur Puff and Fur White for items and buffs!

Some items that can be traded with Christmas Snow Crystals:

And here are some items that can be traded with the rarer Golden Snow Crystals:

Remember, these are just a sample of items you can get with this festive event, so why don’t you get rewarded with all these great items and buffs while helping Little Beak and his friends?

After Christmas comes the New Year! To celebrate the coming of the year 2013, MapleSEA will be several special events!

The mischievous monsters of the MapleSEA is trying to give you a message, but you will have to decode it. During the event period, monsters will drop alphabets. After collecting all the the alphabets and decoding the message, you can talk to the Maple Administrator for a reward!

Here’s a clue to the message!

Upon decoding the message, the Maple Administrator will give you a Devil’s Dice as reward!

In Maple World, there are many different towns and each town have their own way of preparing for the cold winter. The residents are looking for people to help them with their preparations and in return they will reward those who helped out with Snowdrop Coins

During the event period, you will receive a series of quests according to your level.

There are a total of 17 different quests catered to different levels.

-You can only accept 1 quest at a time..
-You can repeat the quests, but can only get up to 20 Snowdrop Coins in a day.

After giving 1 degree to the Warm Thermometer, it will slowly be filled up.

After filling up the b>Warm Thermometer, you can return to Cassandra to receive your reward of 20 Snowdrop Coins and the belt of your choice!

Ever wished that you could choose the rewards that you want from an event?

This Christmas, we will be having a Make A Wish event where you can choose the rewards you want!

During the event period, Fake Santa will be spawned in random maps.

This Fake Santa will drop A Wish Card.

After obtaining A Wish Card, you can proceed to any of the major towns to look for a Christmas Tree.

Tip: The more you vote on a particular item, the higher your chance of getting the item you want!

Below are the items that you can choose from!

Aside for the HUGE Gachapon Update, this December, the Gachapon Jackpot item is: Elize’s Lap!

Hurry to get your now! Before someone else gets it!

This work is licensed under a Creative Commons Attribution-NonCommercial 3.0 Unported License.